Every year, hundreds of motorcyclists ride across Pasco County to participate in the Hittin’ the Road for Hospice event in support of Gulfside Hospice. Members of the Chrome Divas have been participating since the event began in 2012. One of the Divas’ fearless leaders, Roxy Philip, has been a constant presence at the event and an inspirational fundraiser for Gulfside Hospice. She is not only a cool biker chick, she’s also a natural when it comes to fundraising.

When asked how she’d describe the Chrome Divas of Trinity, Roxy Philip said, “We are a female riding organization that’s all about going out and having fun; and if we can help people out along the way, that’s gravy.”

The motorcycle organizations that take part in Hittin’ the Road for Hospice often fundraise on behalf of Gulfside Hospice in competition with one another to earn recognition at the event and bragging rights for being the top fundraising organization of the annual event. The Chrome Divas of Trinity have an impressive winning streak of being the top fundraiser. This year, they became the first recipients of the Wings & Wheels Award, a giant trophy awarded in the same style as the Stanley Cup, where winners hold onto it for one year before returning it to be presented to the next year’s winner. The Chrome Divas will get to hold onto the trophy for a year to commemorate their victory. 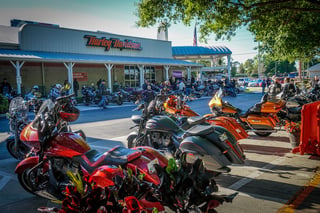 When asked how the Chrome Divas managed to pull off this victory, Roxy shared her secret. “We hit up friends and family on Facebook, asked our coworkers to support us at work, and then took advantage of a corporate matching gift program.” Roxy said. “The Pall Corporation matches 100% of employee donations up to $3,000 per employee. We accept donations and get it matched by Pall to double every donation we receive.” Social media and the ability to match gifts give The Chrome Divas of Trinity an edge on the competition. In April 2017, The Chrome Divas raised $5,260 for Gulfside Hospice’s patients and their families.

Roxy and other members of The Chrome Divas first began supporting Gulfside Hospice when they were asked to join the very first Hittin’ event committee. They’ve continued to fundraise for Gulfside’s patients because some of their own family members have experienced the benefits of hospice over the years. Roxy shared that her stepfather passed away on hospice two years ago and it affected her profoundly. She recalled that, “the hospice workers were so caring they seemed like extended family.”

The Chrome Divas are a close-knit group with a lot of heart. Because they only have five members, they have formed long-lasting friendships with each other. When describing the other members of her organization, Roxy said, “even if we don’t ride every day, we talk a lot. When we get together, we’re able to just pick up right where we left off.” That is the definition of true friendship.

If you want to fundraise with the skill of the Chrome Divas of Trinity, start by asking your employer if they match donations employees make to non-profits. If so, take advantage of their matching gift program. Roxy also has more advice to help you replicate her success. “Think of asking for donations like you’re an actor going in for a part. You may not have done your own stunts before, but you’ve got to be confident and say, ‘I can do that.’”

What does hospice pay for?

Most people think hospice care is expensive. However, Medicare, Medicaid and most insurance...

When patients cannot be cared for in their home, they are welcome in one of ours. The Gulfside...

When it comes to choosing the right kind of care for yourself or a loved one, it’s important to...